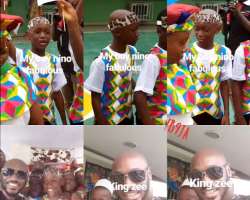 Singer, 2Baba, is really trying at ensuring that he plays his fatherly roles well with all his kids both within and outside his marriage.

It has not been easy but for the fact that he claimed father to the kids, he has ensured that they don’t lack anything even if they are with a new father.

The singer had two boys with now married Sumbo Adeoye and despite that she is married, he still creates time to chat with his babymama and the welfare of the boys.

Annie has been an understanding lady and there hasn’t been any form of issue on these as the singer recently paid a visit to Zino’s school to attend his cultural day.