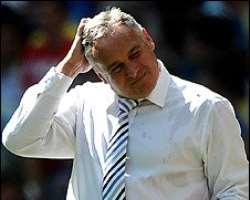 The Tangerines twice came from behind to seal promotion to the Premier League with a thrilling 3-2 win at Wembley.

The victory puts Blackpool in the top flight for the first time since 1971 and is said to be worth about £90m.

“I cannot tell you what a difference this will make for people in Blackpool. They're going to get so much money from the Premier League,” said Holloway.

Tourism officials are expecting the local economy to receive a significant boost, estimating the figure could run into tens of millions of pounds.

And Holloway, who will lead his team on an open-bus parade on Monday, added: “We spoke about all sorts of things before the game. We knew about the quality Cardiff had and we're learning as a group that we have to believe in ourselves.

“I'm so proud, not just for my team but for the area we come from. I can't believe this. It's outstanding.

“I have never worked with a group of people who deserve this more. I can't put this into words. I'm bursting with pride.”

Cardiff, bidding to become the first Welsh side to play in the Premier League, led twice through Michael Chopra and Joe Ledley.

But the Bluebirds were pegged back by a goal apiece from Charlie Adam and Gary Taylor-Fletcher before veteran frontman Brett Ormerod cracked the winner in first-half stoppage time.

The victory seals one of the most unlikely promotions to the highest tier in English football in recent years as Blackpool, who were in the bottom division just nine years ago, had been tipped as favourites for relegation from the Championship this season.

“I can't put it into words, it's unbelievable,” stated Adam.

“All the lads deserve enormous credit, we've worked so hard and now we've earned the right to play at Old Trafford, Stamford Bridge and so on.

Ormerod, who scored what turned out to be the winner just before half-time, also struggled to put his feelings into words.

“I'm absolutely speechless,” he said.
“We got written off at the start of the season but the gaffer has come in… he deserves knighting I tell you.

“It's the gaffer who has put the belief in the lads, we've never stopped fighting and this is the result of all that.”

Blackpool – whose average home crowd of 8,611 was the second-lowest in the Championship this season – will be the smallest club in the top flight since the formation of the Premier League in 1992.

They will rub shoulders with the likes of north-west neighbours Liverpool and Manchester United next season and have already been given somewhat ungenerous odds of 10,000-1 to win the title.

“The manager has to take massive credit,” reflected midfielder David Vaughan. “He came in during the summer and changed things around.

“It's all a bit of a fairytale to be honest. We've got all these great grounds to go to next season, but for now we're just going to take it all in and enjoy it.”

Midfielder Keith Southern added: “This is one of the best days of my life. The lads have run through brick walls for the club this season.

“We always felt we had goals in the team and the boys never know when they're beaten.

“Never in a million years did we believe this could happen at the start of the season. But it shows what can happen with a bit of belief.”

Meanwhile Helen France, who is the executive director of tourism at Blackpool council, believes the whole town is set to benefit from the team's success.

She told BBC Radio 5 live: “We will absolutely have more people here on the back of the football result and that is great for the town.

“We are so excited about this. We think at the minimum it will bring tens of millions of pounds to the town.

“We are really hopeful we will get many more visitors and many more overnight stays but also it boosts the profile and the reputation of the town that comes with it. This is enormous for us.”

And Blackpool chairman Karl Oyston is eager to maximise the opportunities.

“The impact on the town will be massive,” he told BBC Radio 5 live.

“We need to see the council as soon as we can to capitalise on the result and make sure we do all we can to promote Blackpool.

“Also, I have a new stand to build, a training ground to develop and players to sign – so I am going to be very busy.”