Actress, Angel Samuda Set to Celebrate her Birthday with Orphanages 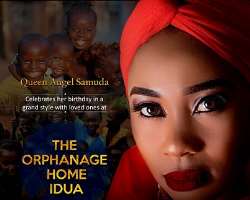 The light skin actress, who also double as the face of Bellaword, shows off her smoking body in the new shoots.

She has chosen no other place to celebrate the remarkable day but with the less privileged kids in her home town, Eket, Akwa ibom.

The rising star, who starred in a new movie titled "the road not taken" is a rare blend of beauty and hard work. Alongside her acting career, she is also a fashion entrepreneur.