Ghost in My Home 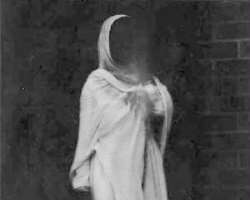 He touched her face with gentleness...she never quite felt before. His kisses left her in a passion of sheer ecstasy and those masculine arms embraced with such an inner warmth that no other man had expressed from within his soul to the angelic porcelain body he caressed beneath him. Eyes opening, Elisha found herself in a half way sleepy state of mind. Rubbing a long lengthy feminine finger with its red painted nail, careful not to scratch her tired eye that begged for a massage.

She arose up, from the dream again. It seems more often then ever now, that she would dream of her deceased husband whom had passed away on a sunshiney day in the middle of June. The funeral was not what was her cup of tea to attend and tears flowed past cool blue cornflower eyes. The curls of her golden strands, wrapped around her round face, cupping it gracefully as her eyes blinked the tiny teardrops, falling off the perfect fringed mascara that hours before she had carefully put on the tips of her eyelashes and leave the finish look with a beautiful lushness to last all day.

But Elisha had wondered, actually pondered in her mind, as if it wore of the upmost importance, "I wonder if this stuff really last all day long?" she asked herself in her mind. Knowing all too well, after all those tears that found their way to swell up in the tiny corners of her blue faded eyes, she knew they'd find their escape and take refuge upon her alabaster cheeks that would be a red burnished glow from all the excitement and hurt from the dream and of the death of losing her husband, Griffin Tylor James.

On a morning so beautiful and bright, one would stop to think anything terrible could not happen but it did and it happened to Elisha. A picnic for two was the perfect way to celebrate their fourth year anniversary, quite away, a remote place of contentment. No one around, just a nice place in the country.

"Be right back honey, I'm going to pick you some wild flowers," Griffen said. She heard a strange sound and waited for what seemed to be an eternity. A frightening feeling came over her and she knew he was no where to be found, as when the search party had arrived and searched for months and never did his body return or come up in a river or lake. She was desolate, a lost feeling came over her.

Many nights of terrifying dreams embedded in her mind during the night came to her. One where she tried to stop the occurence from happening by flagging down the driver of the other car, but unnoticing or just didn't give a hoot to look at her, he drove right past her and aimed at his target, colliding and crashing with his opponent, Griffin. The two cars left in shambles. Elisha would awaken from those horrifying nightmares, in complete fright and shock was in her eyes. The sweat poured and ran past her cheeks and in the ringlets of her hair as well. One night, she lay asleep and dreaming..."The Dream again.' She awoke and in a half alert state. Before her appeared a vision or a figure in front of her eyes.

"It's me honey...I came to tell you I am fine, please don't have any more nightmares baby and everything's just fine now...you can stop having those bad dreams." His voice rang a gentleness in it. "Griffin"...her voice echoed into the silence of the still dark room...She repeated, "Griffen, I have been feeling your presence, while at times in a room all alone, I can feel you right next to me."

"That's because, the figure said, I been there all along." he smiled at her, sitting near the bed beside her. He embraced her now, cuddling her feminine body in his arms.

"Elisha darling, it's okay, you don't have to have any more nightmares, I'm here now." She nodded and said, "Okay, I won't have them no more, because I know I have you to protect me and that will bring me much comfort. "That's my Elisha, he smiled, as he held her closely, as if she wore a child, comforting and protecting her, in his arms.

From that night on, Elisha James had no more reoccuring nightmares. Now only nice pleasant ones she dreamt in the quite of her home...dreams about her and her husband, on picnics and such, and all the dreams from then on wore special and full of love and warmth.