I am emotionally attached to Emeka Ike, so what? - Muma Gee 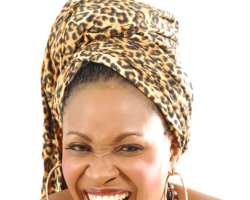 “I am so sorry you guys. please I am really sorry” were the first words that came from the glossed lips of musician, Muma Gee, to this reporter after hours of waiting for her. Dressed in a beautiful flowery summer gown, a pair of matching sandals, and unusually light make-up (a drift from her heavy make-up routine) She had on; powder, brown and gold eye shadow, a slight blush and lip gloss. As she ushered the reporter into her friend's office in Ikeja, Lagos with a warm welcoming and charming smile, she once again apologised for keeping her waiting. Muma at first perception cuts out to be 'the nice girl with the Christ-like features.' In fact the reporter instantly forgave wholeheartedly and forgot completely the hurdles she surmounted (like trekking under the sun and sitting until for hours until her backside begged to be spared) while waiting for Muma Gee.

Are you confused? Muma Gee further explained that the title was chosen because she believes that women are misused, underrated and not given the opportunity, chances and encouragement that the men enjoy all the time. 'The album has loads of songs that touches on various issues that affect women and for that, she is going to be touring round the country and other African countries,' she said.

The musician who attracts controversies like ants to sugar, has had enough controversies to last a life time, was at one time said to be having an affair with Segun Dejo-Richards, the estranged husband of actress Monalisa Chinda. Reacting to the stories, she laughed and said, 'this is embarrassing, I don't know where that is coming from. I don't know what you guys are talking about.' Is it that you do not know the man in question or you don't have anything to do with him?, the reporter asked, 'Bobby Hai shot a video for me and I think he(Dejo Richards) was working with Bobby Hai. He told me he could do publicity and PR for me and so I asked him to make me a proposal. up until now, I haven't seen any proposal. Well I was shocked in January to be told that they read in the papers that I was dating him. I was abroad recording. in fact, they sent me a mail of where Monalisa's ex-husband was refuting the allegations that he has no love affair with Muma Gee but a working relationship. We don't even have a working relationship. he was proposing to be my PR person and that's because I met him with Bobby Hai who shot a video for me. that's all”, she responds.

Again her closeness to Emeka Ike in the ongoing Gulder Ultimate Celebrity showdown camp caused another uproar as it was rumoured that she was having an affair with Emeka Ike. “Well I am emotionally attached to Emeka and I don't see anything bad in it. If you had watched on the day I was evicted, I left him a note and on that note, I said I love him and that same love I will extend to his wife and children.” What can be more passionate and explanatory than that, she asked. “I do not have the ambition of getting even with Emeka in any way or getting close to him more than the way I had been with him in the Ultimate search. He was watching my back and I was watching his. He tells me what his wife likes to eat, the sort of game she likes, how she reacts when he watches football, the sort of clothes she likes, how his children relates with him.

“Most of the time I and Emeka are together, we are gisting about his family life and the next thing we talk about is business. Emeka is business-oriented. Maybe, because he is an Ibo person. Within the short period I was in the house, Emeka taught me a lot of gimmicks concerning business and I like money so much, so tell me why won't I like Emeka?”. Though it was speculated that something happened in the camp between her and Emeka, she debunked it by asking how possible it was when there were cameras every where.

With the amount and kind of controversies that comes her way, she says she would not breakdown and loose her faith. She claims she does not dwell in the past. As one wondered how she copes with the controversies, she raised both her hand and said; 'my sister I don't know how. it is only God that gives me the grace. If I leave here now, they are going to say I had love affair with somebody, I don't know if it is a crime to look the way I look. I think it's my looks'. I think it is because you are single?, the reporter chirped in. “Am the only single girl?”, she fired back. The reporter did not relent, she stated the fact that in Africa it is widely believed that single girls, unlike married ones, move around with men. “That is not the point”, she said. “I disagree with you. It is because there are so many single successful girls and we don't hear about them.”

She seemed to forget her celebrity status so the reporter reminded her. “So because I am a celebrity, anybody can just pick up a male name and attach my name to it”, she queried. “No, that is not fair. At this point, I must say that those controversies are becoming injustice to me by the press. I think the Nigerian press should sit back and think, not all of them though. Some of them actually write and make sense, but those ones that write controversial issues should go and rejuvenate themselves because I think they are running out of ideas and all they just think to dwell on stupid and unreal stories. If it is a true story that is controversial, that is understandable. Why don't they wait until I have a boyfriend and they find out? When people tell me they read this story or that story, I get shocked and I ask 'how'? And I begin to think, where did I link up with this person that led to somebody thinking we are dating'?

Muma has been in the entertainment industry for long now and it doesn't seem like she is tired or ready for retirement. Inspite of all the hurdles and challenges that she faces everyday, what is it that has helped her hold on? Perseverance she said. 'Perseverance and I'm not kidding about that.” She gave an instance with her participation in the Gulder ultimate search. 'You can see how much I persevered at the Gulder ultimate search. 'I persevered a lot', she said as she made to chat with her blackberry phone.

But has the perseverance paid off? Has it been worth the while? “Yeah its worth”. She looked up from her blackberry and laughed. “It has taken a lot of my income. I have invested millions into this career of mine but well, it is making positive returns and I am making a lot of money also, but I push into it and life goes on.”

A recipient of many awards for peace was recently awarded the ambassador for African music in faraway Liberia and at the same time set the pace rolling for her album tour. She was among those chosen to be the ambassador for African music. She said that she received the call and she was told she has been nominated amongst other people. The list was then narrowed to 100 and then to the last four which she is one. But what was it about her that made bag the award? In her words: “the award committee would judge better, but from the little that I know, the genre of music I do, and the years she has invested in to the industry, I have been able to touch people through my music. 'my personality and image as an artiste and also promoting the cultural values and heritage of Africa has really helped me,' she said.

She participated in the Gulder ultimate celebrity show down and was been evicted along with her arch rival in the camp Chioma Chukwuka Akpotha. She stuck more with the the guys and never had a 'girls time' with the other female contestants in the camp due to reasons unknown to her and was also accused of been uncooperative. Later she became friendly with other female contestants with the exception of Chioma who really made life unbearable for her. On the very first day in camp, Chioma threw away her belongings as she threatened, because she refused to remove Emeka Ike's belonging that she was kept in the female tent.

Muma Gee had this to say about Chioma. “We are colleagues and we always meet but I think all my life, I have only met that person three times. One was when we were shooting a movie. The next was at AMAA Awards in Bayelsa and the third time was at The Ultimate Search. I haven't done anything to hurt her. If I have offended her unknowingly, she should have just told me instead of her showing that sort of hatred”.

Speaking on her relationship with other colleagues, she said that she has a better rapport with her male colleagues than the female ones. She even attest to the fact that she is more of a 'guy's babe than a girl', “not because I hate girls but because I feel the guys understand me more and they are more free-minded than the women. This was proven in the Gulder Ultimate search as I did not really enjoy the best of relationships with female colleagues.' She even fell apart with Weird MC whom she had known before the reality show.

Mumas's love for make up is legendary. In fact, her videos has won a lot of awards for the use of make-up. She even attested to the fact that she cannot do without her make-up. Recounting an event that happened while she was in Ghana, during the time of the Haiti's earthquake. She said she was in her hotel room when all of a sudden there was confusion everywhere. The reason been that, there was a rumour of an intending earthquake there in Ghana. “My sister, as I got up instead of me to reach out for my phone, I reached for my make-up bag, grabbed the thing under my arm pit. At least let me be very sure that if at all I am dying, I should die with my face looking good. When I got outside, the whole of Ghana was outside. I just put my make-up bag on a car that was parked outside and the next thing, I was dabbing my face, and somebody turned and said, 'you are making up,? For this tension, this thing reach you to do make-up?' I just said to the person, I use God beg you, when I die, I saw that they dragged people from the ground, so as they drag me, they should drag me looking good. Even when I am dead, I should be made up, otherwise I don't think my coffin will agree to go the grave.”

For Muma gee, her make up gives her joy. As some people love to take coffee, she loves to take care of herself. She has a strong passion for make-up and shoes. They are what she cannot do without. Going to the jungle did not stop her from using her make-up. She even defiled the advice of the organizers of the reality show.