My marriage is intact because I’m mindful of the people I seek advice from –Moji Olaiya, actress 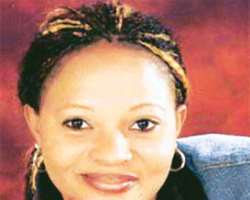 Popular actress, Moji Olaiya, is the daughter of ace highlife musician, Victor Olaiya. She speaks with 'NONYE BEN-NWANKWO about her career and life in her father's household.

How come you didn't follow your father's footsteps by pursuing a career in music?

I always say that my coming into the movie industry is just God's blessing. I don't see it as luck. God's blessing lasts longer than luck. I sing, but it is just that my acting career has taken over from singing. I do more of acting. I sing highlife as well.

So how did you get involved in the movies?

Many years ago, when I was in Yaba College of Technology, I met Gbenga Adewusi. He was just like a big uncle to me. He always told me to come and act in his movies, but I was not interested. After I left school, I got a job with an audit firm. I was also into make-up then. Gbenga asked me to come and make up his artistes on set. When I got there, I think they were waiting for Bimbo Oshin to come and play a particular role. She didn't show up on time and I was auditioned for the role.

And you accepted it?

I could not. I just didn't want to be an actress. My father never really liked the profession. But after some time, I went to drop my CV with somebody at the National Theatre. I saw Gbenga Richards and his wife, Florence. He told me they were having an audition for a stage production and he wanted me to be a part of it. I told him I wasn't an actress, but he tried to encourage me. The man I went to visit urged me to give the movies a trial. That was when I decided to give it a shot. I went for the audition and I made it. That was how I started. I was going for rehearsals at the theatre. Not long after that, I met Bukky Wright and she became a good sister. She is also my mentor. She had a production and I went to her set to make the artistes up. That was where I met Foluke Daramola. She was the one that invited me to an audition for Super Story. I got there and they were doing the casting. They had already done the audition. I didn't know that they had not found the person that would play the lead role. The producer saw me and asked if I had acted before. I told him I had and I was given the script to read. I may have read it well, because I was given the role. That was how I featured in the No Pain, No Gain series of Super Story, and it was what shot me into the limelight.

So, your father eventually allowed you to act?

I didn't even tell my father when I got that role. I think he stumbled upon Super Story and he saw me and said, 'This person looks like my daughter.' He got interested in the series and he liked it. That was how he got used to my acting career. He loved what I did in Super Story and he encouraged me to move on.

Are you into acting full time?

I have a clothing line. I make bridal clothes and other kinds of dresses.

And how do you combine this with your acting career?

I have PAs. I am lucky. I have good hands who work for me. If I am on set and we have orders, my PAs take charge of the orders.

Why did you restrict your acting career to Yoruba films?

I do both. But it is just that I do more of Yoruba movies. I also do more of TV soap operas.

Hotel and Catering Management. But then, I have a diploma in Mass Communication. There was a time I wanted to go into outdoor catering, but I think it is too demanding. Most people wanted me to be there instead of having somebody run around for me, so it is very difficult. I am not a party person. Catering is very tasking. I had to give it up.

Has your father's name opened doors for you?

In a way, I would say yes. When I came into prominence, anywhere I mention Olaiya, people would ask which Olaiya? If I said Victor, they were always eager to do something for me. I got to know that my father had a lot of fans. Most people, especially the older ones, love his music. People are always ready to embrace me and give me a helping hand because of my father. My personality has opened doors for me too. People tell me they like my kind of person and how I behave.

How would you describe your father?

He was a wonderful father. My father had all the money, but he didn't believe in sending his children abroad to study. He was a wonderful man. He gave us education and he was always around, except when he travelled abroad. We saw him very often and we discussed with him. When I was much younger, we were all closer to him than our mothers.

Did he marry more than one wife?

Oh, yes. If our mothers wanted to beat us, they wouldn't dare if our father was around. He was very close to his kids and he always tried to help us in every way. He was always around us, but he was also very strict.

What kind of life did you live as a young girl?

I can't say I lived a rough life. But I did the kind of things that girls of my age did. Maybe that is why I am not interested in going to clubs and parties now, because I did all that when I was young. But I was never wayward. I was just like a normal child.

How was life in a polygamous home?

My father took care of us. My mother was a full time house wife and I don't think that she ever regretted it. If I tell you this, you should understand what I mean. My mother didn't pay my fees or buy things for me. But I was never sent home from school because of school fees because my father paid our fees and bought things for us. Sometimes, I took pity on him. We were many. When all of us were admitted into tertiary institutions, my father still had to pay all our fees. Our mothers encouraged us. But my father supported us financially.

How did you relate with your half brothers and sisters?

We had a very cordial relationship. You would hardly ever know that we didn't come from one womb. We were very close. We never cared if our mothers were close or not. We were very comfortable with one another.

Would you mind if you husband decides to take another wife?

I will not take it. Whether we like it or not, polygamy is not really a wonderful thing. Let me just say I was lucky in my family because of the kind of father I had. Maybe it was because he was educated. Most of his wives were educated too. His wives were introverted and they didn't like partying and all that. My mother is a Lagosian, but she is not the kind of person that believes in juju. Most of the other women didn't believe in that too. Some homes, like mine, are not that lucky. But I will not allow my husband to take another wife. If he wants to, I will not encourage him. If he marries another wife, I think I will quit the marriage. You know the things we have nowadays are so different from what we had in the olden days. I have heard stories of people growing up in a polygamous family and finding things so difficult. It is not a good experience.

W hat is the secret of the success of your

If you sit down with the actresses whose marriages have crashed, they will have lots of stories to tell you. Marriage is not easy. It is just the grace of God. I tell people that when you are in a marriage, the best thing for you to do is to commit it into God's hands. You don't have to believe in your own wisdom. If you do that, there is tendency for you to go astray. I don't encourage people to advise me when it comes to my marriage. Whenever I have any problem, I go to God or I look for older people who are knowledgeable enough to advise me. I will go to people who will not tell me to quit the marriage. It is not that I have not experienced any difficulty in my marriage. I have, but I try to apply wisdom and patience. They that have broken homes, I don't think they wanted it that way. Perhaps they didn't have a choice and they had to come out of it. I thank God that my marriage is still intact. I don't pray that it gets broken.

I met my husband some years back through one of my brother's friends. They were together in America. I learnt that every time they were watching a movie and they saw me, my husband would always tell them that he liked me a lot. He told them he would want to date me. Eventually he came home and we were introduced to each other. But I wasn't interested. I never liked dating guys who lived abroad. But then, we became friends and after sometime, we started dating. He comes from a very humble background and his parents are educated and staunch Christians. When I met his family, I was impressed. So, when he asked me to become his wife, I readily accepted.

Now that you are married, do you still enjoy the attention of your male admirers?

Oh yes. But I let people know that I am married. I apply wisdom. When you are not careful, some of these men will bring you out of your husband's house before you know it. I have a cordial relationship with them and I tell them that I am married and I am married for good. I don't have the time for side attractions.

Does he support your career?

He is very supportive. For the past two weeks, I have not been at home. I have been busy on set. Other men would have grumbled about that, but not my husband. At times when I am running late, he tells me to hurry up so I don't go late.

Did you ever think of marrying a fellow actor or movie producer?

I never gave it a thought.

How have you been able to keep away from scandals?

I can't say. I keep to myself most of the time. If you have too many friends, there is no way you avoid scandals. If I do something and I keep it to myself, how will anybody know about it? I always keep to myself.

So you don't belong to any clique?

I don't have time for that. I go on set and after the job is done, I go back to my house.

I can't plan for myself. God knows better. Whatever God has in stock for me, I think He will make His way for me.