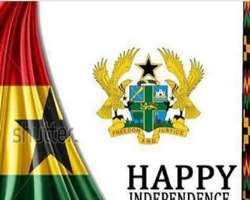 On 6 March 1957, the Gold Coast (now known as Ghana) gained independence from Britain. Ghana became a member of the Commonwealth of Nations and was led to independence by Kwame Nkrumah who transformed the country into a republic, with himself as president for life. The country was the first to gain independence from European colonialism.

Before it was colonised, Ghana was made up of a number of independent kingdoms, including Gonja and Dagomba in the north, Ashanti in the interior, and the Fanti states along the coast. The flag of the newly independent state was designed by Theodosia Salome Okoh.

The red signified those who had died for independence, the gold is the mineral wealth with the green representing the rich grasslands of the area. The black star is the symbol of the people and of African emancipation.