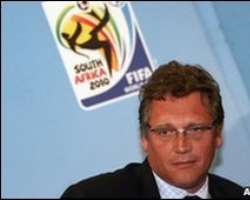 A senior Fifa official has said he was “disappointed” by the number of World Cup tickets sold to fans in African countries.

Jerome Valcke said only 40,000 tickets have been sold in countries in the continent outside of South Africa.

The football body has faced criticism for not making tickets accessible to Africans, as most tickets were being sold via the internet.

It is the first time the World Cup is being held on African soil.

'Priced out'
Mr Valcke – who has previously billed the event as a “real African World Cup” – said that African sales were “poor” and that Fifa would have to re-think its strategy towards Brazil, hosts of the 2014 Cup.

“It's really not a lot of tickets when you think that we have so many African countries playing in the World Cup,” he said at a press event in South Africa.

“The system that we put in place was not perfect for South Africa and for Africa”.

South African Tourism Minister Martinus van Schalkwyk said on Tuesday that the figures were 76% less than those forecasted for the event.

In March, Mr Valcke denied that Africans were being priced out of tournaments.

While tickets in South Africa were offered at a lower price, fans in other African countries had to pay the standard amount – with the cheapest costing $80 (£54).

Critics also said that many Africans would face difficulties accessing the internet, or might not have a credit card to make purchases online.

Over 2.5 million tickets have been sold out of 3 million available for the World Cup, which begins in three weeks.

More than a million have been bought by South Africans.