Militants to Alaibe: We're not excited 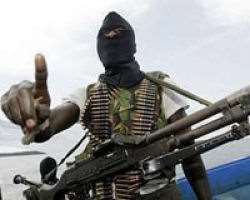 
UNREPENTANT militants in the Niger Delta, say they are not excited by the Wednesday renewed commitment to ensuring that President Goodluck Jonathan is given the support he needs especially in the development of the oil and gas region.

Apparently not persuaded, the Joint Revolutionary Council (JRC), an insurgent network, on Thursday declared that as the highest decision making body in the struggle for the liberation of the peoples of the oil region, ''we hereby warn that it is too early for anyone to begin to get too excited with the renewed vision of post amnesty programmes''.

Cynthia Whyte, spokesperson for the JRC in an on-line statement to AkanimoReports added, ''it is one thing to have a President that is committed to ensuring the total success of the amnesty programme (and a speedy development of the Niger Delta) and a Presidential Adviser that they trust and then it is another thing to beat the bureaucracy that has haunted the amnesty program and it's funding for almost a year now''.

The ex-militant leaders, however, noted that the cumbersome nature of the previous arrangement where there was conflicting roles and responsibilities between the office of the Presidential adviser and the then Presidential Amnesty Committee headed by Godwin Abbe resulted in a drag and slow down in the delivery of post amnesty planned programmes.

They also thanked Timi Alaibe for being very accessible since he resumed office and praised him for hosting the most successful post-amnesty meeting.

The Wednesday meeting marked the first time the Jonathan Presidency was hosting the repentant insurgents with the new arrangement that gives Timi Alaibe the mandate to oversee the Presidential Amnesty Programme.

They urged Alaibe to intervene in the reconciliation of some of the factions of the various groups and leaders as well as impress on some state governors who have refused to endorse the amnesty process or support it. Most prominently mentioned was Chibuike Amaechi of Rivers State. This complaint was also made to President Goodluck Jonathan at a late evening meeting he had with the ex-combatants at the Presidential Villa at Aso Rock.

But the JRC is insisting that they have been informed that President Jonathan has given express orders for increased financial autonomy of the Presidential Amnesty Programme.

According to them, ''that is good but that is not enough. We demand that the fullness of the declared amnesty be exercised immediately. The amnesty as declared by Umaru Yar'Adua should be gazetted immediately. There are a few more active combatants in the creeks and they will not give up arms unless they are sure that the amnesty is true, sincere and for the greater good of all people''.

Continuing, they said, ''governors such as Amaechi and Godswill Akpabio who have refused to support the amnesty programme in their various states should be warned that the status quo might change anytime. It is funny and ironical that while they can spend billions to host international musicians to vain peace concerts in Port Harcourt, they refused to fund post-amnesty programs in their various states. Such arrogance will be dealt with at the appointed time. This is not the time to undermine anyone''.