Nollywood Actor, IK Ogbonna Reveals Man his Wife is in ‘Love’ With 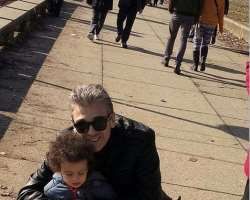 Handsome Nollywood actor, IK Ogbonna, is a lucky dude to have a handsome man for a father in-law. The actor was so happy sharing the picture of the father of his pretty wife, Sonia.

Many of his fans were shocked seeing such a cute man so young that he still can melt hearts as many wonders how come he looks so young and having such a big daughter as Sonia.

IK sure will gush about his father in-law as h stated that while wishing him happy birthday recently and thanking him for always supporting the family.

“Happy birthday to my amazing, ever supporting father In-law. God bless you now and always,” he wrote.