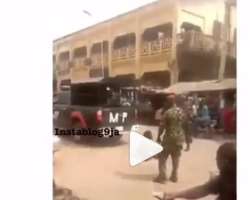 It is so sad that the some Nigerian citizens can no longer have hope even in the security personnel of the country especially the Army after a viral video shows how inhumane they can be.

A recent video went viral showing how the Nigerian Army with their years of training put the force to public ridicule after some officers were seen beating up a crippled man for wearing the Cameo uniform.

Though it is wrong to wear the Army Cameo, but the Nigerian soldiers went too far knowing that the man is crippled and also threw away his wheel chair before descending on him.

According to a state statement by the Director, Army Public Relations, Brigadier General Sani Kukasheka Usman said the two soldiers have equally been charged for assault by their Commanding Officer.

Well, “The attention of the Nigerian Army has been drawn to a video clip in which two soldiers were seen maltreating a physically challenged person for allegedly wearing a camouflage shirt.”“We wish to inform the public that the incident took place on Tuesday 7th February 2017, at Onitsha, Anambra State.

“In line with our zero tolerance for acts of indiscipline and unprofessional conducts especially in relation to violation of human rights, we wish to further state that the soldiers involved have since been identified and apprehended. They have also been charged for assault by their Commanding Officer.