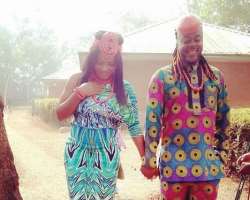 Controversial Nollywood actor, Benson Okonkwo, may have not had the best times with his fans but he has been able to remain focus in his craft.

Movie roles don’t come regularly considering the fact that there are lots of talents in the industry but for Benson, it has been God all the way as the year 2017, started on a good note for him.

Aside featuring on the set of other producers, he has been able to conclude works on his own movies which is already on sale and he is already cracking his head on next production.

Hmm, imagine that the news of the actor breaks out that he is getting married, how will some set of his fans feel who have accused him wrongly of his personality.

The actor is currently on set the movie ‘Raster Prince’ which is being produce by Andy Best, as he had a taste of what walking down the aisle feels like.

You just have to wait for the movie to come out all the same.