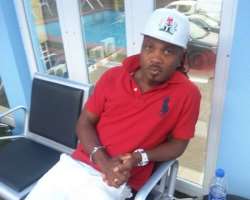 It is no longer funny again and with the way things are going, Nigerians might end up being the Police to themselves and might melt out their anger very soon of the type of Police officers they see each day.

Just when someone came out recently to appreciate singer Korede Bello for coming to his aide, after he was assaulted by some Policemen at night, now singer, African China, has just fallen victim of Police insensitivity.

The singer was returning from a video shoot with Sound Sultan in Ajegunle and he was blocked by a Police man who was pointing a gun at home and the singer had to shout out which attracted people around to come out.