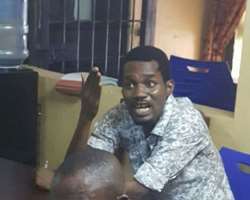 CEO of Ebony productions, Seun Egbegbe, is in the news again and it seems things are beginning to get really bad for him as he now depends on illegal means to survive.

Just some months ago, he was accused of phone theft with case still in court after he was nabbed in popular computer village, now he has getting himself messed up.

The one time lover to actress, Toyin Aimakhu now Toyin Abraham, was recently caught and beaten after as he was alleged to have stole the sum of N10 million from a Mallam at Gbagada General hospital.

Hmm, this time maybe he will come out with another excuse that he is busy washing his clothes and was never at gbagada or he went there to see a friend who was sick.