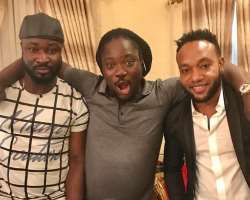 There have been serious issues between singer, Kcee and former record label mate, Harrysong after the duo fell apart some months back.

Harrysong and his former record label Five Star records parted ways in a very bad note which saw the singer throwing various shades at singer, Kcee in particular and that gave birth to them shading each other.

Well, there have been various claims from both ends and court issues but they have been able to allow peace reign as they were recently spotted together with legendary singer, Daddy Showkey.

Harrysong even went on to let his fans know that he so much miss Five Star records which he describes as his family.