SAMBO THROUGH AS VP 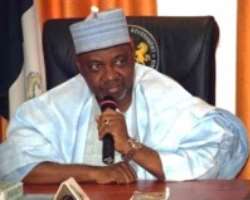 FINALLY, Nigeria has a new Vice President, Alhaji Namadi Sambo, whose nomination was yesterday endorsed by both chambers of the National Assembly. He now merely needs to be formally sworn in with the oath of office administered on him to assume office.

It took a personal plea from President Goodluck Jonathan for the Senate to hasten the clearance of the former Kaduna State governor.

Consequently, the Senate, which planned to screen the Vice President-designate at a later date, quickly approved his nomination by Dr. Jonathan.

And at the House of Representatives, the lawmakers' desire to clear Sambo became very obvious right from when Jonathan's letter nominating him was read to them. And, but for a lone voice of dissent, Representative Ugbale Jakada of the All Nigeria Peoples Party (ANPP) from Kano State, they did just that.

But Sambo had to wait until later in the day to be sworn in, because even though he was cleared by both Houses, the Representatives did not return to Chamber to pass the Votes of Proceedings to enable the Assembly bureaucracy send a letter to the Presidency and pave way for Sambo's swearing in.

Said Ayogu Eze, the Senate spokesman to journalists in the Senate yesterday: 'As you are aware, we have just approved the President's nominee for the position of Vice President, Architect Namadi Sambo and we have to go into close session to discuss the nominee and it was (the) consensus of senators that being a governor and being somebody who has been in public service and is well-known, that we are very comfortable with his credentials and that we believe that he has the wherewithal to do the job and we therefore agreed that we give him accelerated approval.

'When the decision was taken at about 2.00 a.m. last night that we are going to go through our standing rule 40(2) to be able to take the presidential communication today (instead of a later date as his statement suggested), all the newspapers and media houses had gone to bed and it will be wrong for me to start calling up anybody at that point in time. I have to apologise because the normal procedure is that we would have read the communication today and then we will take the screening at the next legislative date or on a date to be appointed by the Senate. But this was in consideration of the plea by our President and Commander-in-Chief of the Armed Forces that he was anxious to complete his government by swearing in the Vice President tomorrow (today) and moving on with the programmes of his administration and we are also as anxious as he is that the government should mobilise and get started and that was why we obliged the request.'

Order 40 (2) of the Senate's Standing Rules, which Eze referred to, states: 'A message from the President, if presented to the Senate by the Leader of the Senate may be brought up at any time before the start or close of public business, and shall be considered forthwith or ordered to be considered upon a future day.'

The approval came in less than 15 minutes, with the Senate President David Mark reiterating the need for the observance of the principle of separation of powers.

Before the Senate began its sitting, Mark asked for an executive session where he briefed his colleagues about the item on the Order Paper relating to Dr. Jonathan's request.

According to sources, the leadership of the chamber appealed to senators to expeditiously approve the nomination so that the President could settle finally to run state affairs.

After the executive session, Mark asked the Deputy Senate President, Ike Ekweremadu, to lead the debate on the subject mater. But before he ended his presentation, senators started urging Mark to put the question.

'We are about to carry out an important and historic role in the life of our nation. The Constitution in Section 146 requires us to do what we are now doing. This is borrowed from the American Congress where after the death of John Kennedy, his deputy was sworn in to succeed him. The nominee is eminently qualified having been commissioner and governor in Kaduna State. He is capable. We should only advise him to see the whole country as his constituency. He should be a bridge builder. Let us put the question and let the nominee be approved”, Ekweremadu remarked.

Mark put the question and it was unanimously passed.

Before rising, Mark congratulated Sambo on behalf of the Senate and tasked him to join the Legislature in the task of moving the nation forward. He added that the Legislature would give the Executive the needed cooperation based on the principle of separation of power.

In another development, the Senate again, did not swear in Alphonsus Igbeke who came to replace Joy Emordi as senator representing Anambra North Senatorial District. Answering questions on the failure of the Senate to swear in Igbeke whom the Court of Appeal in Enugu had given the nod, Eze maintained that the Senate would not deviate from its earlier stand because, according to him, it is law-abiding. He also maintained that there is a subsisting case at the Supreme Court and the Senate would not run foul of the law.

Jakada had cited Order 8 (2)(2) of the House Rules urging it to defer the consideration of the nomination to a later date to allow every member ample time to go through the Curriculum Vitae (C.V.) of Sambo.

The request elicited serious objection from other members who immediately shouted no! no!!

And ruling on the order, Speaker Dimeji Bankole said that since the aspect of the House rule referred to also made provision for the immediate consideration of communication from the President, the legislators would go ahead to consider the nomination.

And suddenly, some members who had become impatient over what they termed as delay in confirming the appointment of Sambo quickly began to chant the song, 'All we are saying, give us Sambo ooo'.

The situation got to a stage where members engaged one another in direct lobbying right inside the chamber.

When calm returned after 25 minutes, Bankole said: 'I understand what is happening but the leadership will handle the situation as appropriate.'

Subsequently, the Majority Leader of the House, Tunde Akogun was invited to present a motion for the consideration of Sambo's nomination, and he was quick to solicit the co-operation of members in considering and clearing the nomination of Sambo.

In his own remark, the Deputy Speaker, Usman Bayero Nafada, urged every member to support the nomination to facilitate smooth governance in the best interest of Nigerians.

On behalf of the House Minority, Aliu Ndume said: 'After listening to the Speaker when he read out the letter from the President about the Vice Presidential nominee, my concern was shifted to section 133 which spelt out the qualification to possess before seeking to occupy that office. I found that he had met all the qualifications and on this basis, I have no objection to his appointment.'

When the question was thrown to the House on whether the appointment should be confirmed, there was an overwhelming voice vote of 'Yes!'

Sambo did not have to come to the National Assembly to face the two Houses to pass his nomination, but a sprinkling of supporters were there to show solidarity. Only a few were allowed into the precints of the Assembly. Even then only a fewer figure got within the lobby itself.

In the Senate, the public did not witness the deliberation of the lawmakers as they went into closed session, and when the lawmakers opened their doors to the public, it took less than five minutes for Sambo's approval to come through.

In the House of Representatives, it was a different ball game as a rowdy session ensued.

Apparently fearing that the situation was getting out of hand, and after he gave room to Nafada and Minority Leader Ndume to speak, Bankole, in the midst of the confusion, put the question on Sambo's approval.

Many who were involved or distracted by the confusion did not hear Bankole's question. The few who heard gave their approval. Not many heard him ask for those against Sambo to indicate by a voice vote, so only a handful said 'Nay.'

Bankole declared that those in support had the day and hurriedly slammed his gavel.

As many members were wondering what was going on, Akogun to move for an adjournment that was also hurriedly carried. Again, Bankole swiftly, even standing on his feet hit the gavel, closing yesterday's session.

In the heat of the moment, the lawmakers neglected to take a short adjournment to return to pass the Votes and Proceedings so Sambo could be sworn in early today.

Many believed that a group of lawmakers wanted Sambo's approval delayed, if it could not be stopped. None of the lawmakers agreed to speak on the development, though it was gathered 'some forces wanted to use a pending EFCC petition with lawmakers, and a late petition that also arrived the Senate Tuesday, to stop Namadi.'

But not more than a kilometre away in the Aso Rock Presidential Villa, Sambo was beaming with smiles as he was led by his governor - colleagues to formally meet his new boss, Dr. Jonathan.

Both men exchanged pleasantries, with Sambo even being introduced to a visiting foreign delegation. He was to drive out shortly after with other governors.