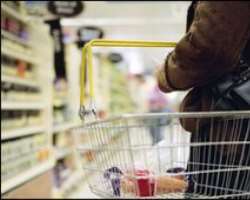 On the Consumer Prices Index (CPI) measure, inflation hit 3.7% – well above the target of 2% and the highest rate since November 2008.

On the Retail Prices Index (RPI) measure, which includes housing costs, inflation was up to 5.3%.

The cost of food rose by 2.6%, the ONS said, thanks largely to rising transport costs over the last 12 months.

Fuel costs have increased by more than 25% in that time, the ONS said.

Last month's disruption caused by volcanic ash had little impact on prices, however.

Higher duty on alcohol and cigarettes introduced in April's Budget added to inflation in April, the ONS added, and clothes prices also rose.

'Downward pressure'
Bank of England governor Mervyn King has written a letter of explanation to the new Chancellor, George Osborne, as the official CPI measure remains more than one percentage point above the 2% target.

Continue reading the main story
By keeping inflation low, we will thereby support growth and employment

Mervyn King
Governor of the Bank of England
Mervyn King's letter to Chancellor George Osborne
George Osborne's reply to Mervyn King
Earlier this month, Mr King said he expected inflation to be higher in the coming months than previously forecast, but insisted that it would slow to below the 2% target before the end of the year.

In his letter, the governor said inflation had accelerated significantly since September last year.

He blamed rising fuel prices, the rise in VAT and the fall in the value of the pound for the rising trend.

But he warned that these temporary factors were “masking the downward pressure on inflation from the substantial margin of spare capacity in the economy”.

“If the recovery continues as expected, that will gradually erode the slack in the economy, bringing inflation back to target,” Mr King added.

The Bank of England's key interest rate remains at a record low of 0.5%, and this rate is unlikely to rise soon according to economists.