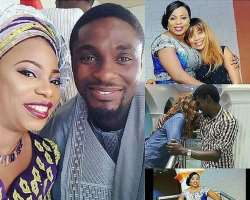 There are just some things that cannot be hidden for long like love, pregnancy and someone who loves drinking and for Nollywood actor, Adeniyi Johnson, things just have to take new shape this 2017.

The actor has been able to manage a single life for a while now since his ex-wife, Toyin Aimahu now Toyin Abraham, has refused to accept him back due to allegations of infidelity.

But while on the road to recovery from the failed marriage, the actor suddenly found solace in the arms of fellow actress, Seyi Edun, as they have both been having nice time together but have constantly denied it.

Sure, it’s the life of celebrities and sometimes filled with denials but the romantic life could not be hidden for long as their love photos has been leaked.

The two love birds were seen getting blessings from their godmother, popular prophetess, Mary Olanbiwoninu, who made it known after she shared their photo that they are just the perfect couple.

In her words, "My favourite couple, if God be for us, who can be against us?"

So finally, the truth is out and hopes this lead to marriage and birth of many children.