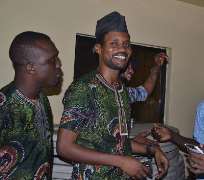 Controversial showbiz promoter and CEO of Ebony Productions, Seun Egbegbe, is back to the public light after his alleged theft issue which trailed him towards the end of the end of 2016.

Although, he denied the allegations and after he was granted bail while the issue is still pending in court, he decided to take a rest as he flew out of the country.

Well, it’s New Year, Seun is back as he was seen in a public function recently yet he was still able to control some crowd as his fans and friends came greeting him.