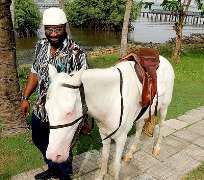 Alter Planet record owner and singer, Harrysong, is currently doing fine since leaving his former label and he has just released two singles to his credit and also has featured singer, Timaya, in his latest ‘Kwekwe.’

The singer can’t kill himself with too much work and so decided to relax at the beach side where he can get more inspiration to make good sounds for his fans.

Being your own boss is something of pleasure and he can start making plans of signing his own artists as and when due but for now, it’s about him enjoying his freedom as he took a stroll down the beach with his rented Horse.