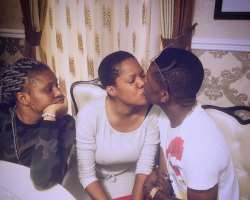 Hmm, Nollywood actress, Toyin Abraham, has created a serious scene during the shoot of her movie, ‘Alakada Reloaded,’ where she featured lots of stars.

What caught the attention of many was the fact that she was seen kissing singer small doctor which perhaps is also a guest actor on the set.

Well, for Small Doctor, as a sharp guy, he is already beginning to nurse plans for acting after having a feel of what the actress ex-hubby, Adeniyi Johnson, has been missing for a while now as he writes, “It Seems It's High Time I Switch To ACTING.”