Actor, Yomi Fabiyi Gets Urgent Medical Attention as he Falls Sick in Hotel 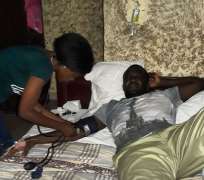 Popular Nollywood actor, Yomi Fabiyi, is currently recovering after he suddenly fell ill while in a movie location and was immediately attended to.

According to the actor, this is the first time in his entire career that such a thing will happen to him while on set as he decided to keep it away from his colleagues and the producer of the movie.

He explained that it was the staff of the hotel where there were lodged that noticed his unusual behavior and had to call in the medics which arrived on time to treat him.

According to him, “For the first time in my career I broke down on location and now getting treatment. Pragmatic hotel staff noticed my condition and had to call in the medics and the luckily the medical team came on time, other cast and crew yet unaware though, they are working elsewhere, don't want to disrupt that shoot, abi nah. Switching off temporarily because drips now getting me tipsy. I am alone though. I should get better before tomorrow I was told and in fact regain my voice back and have my breathe return to normal.”