Actress, Collette Orji Limona Reveals Why She Loves Flaunting her BOBI in Public 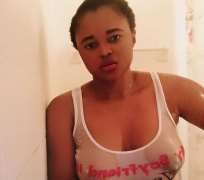 Nollywood actress, Collette Orji Limona better known as Mrs Coco Wonder, has been doing well for herself in the movie industry and the new is just a time she decided to rekindle old memories.

In doing such, the actress flaunted her milk factory while recalling how she was disgraced in a market by some of her school mates due to the fact that her chest was flat.

She disclosed that at the time, she was just 11 when she got into secondary school as she was approached by about 12 girls

In her words, “I was just Eleven years old (11) when I entered secondary school & Both Girls & Boys Wouldn't Let Me Be. A group of Girls After Having A meeting ABOUT COCO, About 12 girls, my own classmates and I should even guess Age mates, Ambushed me inside the market & put me in the center as they finally sent their executive branch to Expose me on the subject matter. 'Collette Nkem, We have concluded and we want to know why you don't have BREAST ! Is it because you are tying your breast so you look like you don't have BOBI? (Boobs). Thanking God for my breast so Far.”