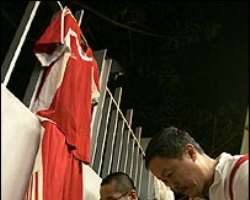 Singapore has executed two African men for drug smuggling after rejecting appeals for clemency by Nigeria's president, the UN and rights groups.

A small group of activists held an overnight vigil outside the prison.

Singapore has some of the strictest drugs laws in the world and a long history of ignoring pleas for clemency from foreign governments.

Tochi was arrested at the airport in Singapore in 2004, carrying almost a million dollars worth of heroin.

Malachy was convicted as the intended recipient of the drugs.

'Duty'
Both men were hanged at around 0600 (2200GMT Thursday) at Changi Prison, officials said.

About 10 activists held an overnight vigil outside the prison compound, hanging a football shirt on the wall as a mark of Tochi's love of the game.

He maintained he had gone to Singapore to take part in a football tournament.

On the eve of their execution, the Singapore government released a letter Prime Minister Lee Hsien Loong had sent to Nigeria's President Olusegun Obasanjo.

“Mr Tochi's family will find Singapore's position difficult to accept, but we have a duty to safeguard the interests of Singaporeans, and protect the many lives that would otherwise be ruined by the drug syndicates,” he wrote.

Mr Obasanjo, along with the UN and human rights groups, had appealed for restraint.

Singapore is believed to have one of the world's highest rates of execution per capita, the BBC's Andrew Harding reports from the tiny city state.

Just over a year ago, the Australian government angrily condemned the hanging of one of its citizens convicted on drug trafficking charges.