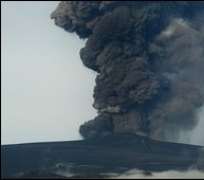 Many UK airports are closed between 1300 and 1900 BST as volcanic ash from Iceland drifts across Europe, with more disruption likely over coming days.

Airports in Northern Ireland, Prestwick near Glasgow, some on Scottish islands and the Isle of Man are also affected.

London airports are open. Travellers are urged to check with their airline.

Dublin airport remains open, but planes have been grounded in other parts of the Irish Republic.

Situation 'fluid'
So far Ryanair has cancelled 115 flights, Easyjet about 100 and BA three return trips, with all airlines keeping the situation under review.

The UK no-fly zones are set out by the Civil Aviation Authority using Met Office data.

Forecasts suggest the ash cloud could extend further over the UK during Monday and Tuesday.

The air traffic authority Nats' Jonathan Astill said: “Unfortunately, yet again, a mixture of volcanic activity and weather systems have conspired to bring a cloud of ash down towards the UK.”

The cloud is expected to lie over the London area by Tuesday, but is likely to have drifted out of UK airspace by Wednesday, forecasters predict.

Transport Secretary Philip Hammond said the situation was “fluid” but passenger safety was the top priority.

Ash from the Eyjafjallajokull volcano has caused disruption to thousands of flights since April.

Professor Brian Golding, head of forecasting research at the Met Office, said the cloud stemmed from an eruption on Thursday.

“The volcano has now dropped back in height. It did that yesterday, so the ash coming towards us for the future isn't quite so deep as it was on Thursday.

“It isn't going to turn into a huge area and it's being blown eastwards, between south-east and east.”

He said he had written to BA chief executive Willie Walsh after the airline cancelled three flights to Scotland on Friday. BA said the flights were cancelled as a “precaution”.

Sir Richard Branson, president of Virgin Atlantic, criticised the decision to ban flights from Manchester, branding it “beyond a joke”.

He said there was no evidence planes could not continue to fly safely.

“All the test flights by airlines, aircraft and engine manufacturers have shown no evidence that airlines could not continue to fly completely safely,” he said.

“Over 1,000 flights took off from France last week in similar conditions to that which exist in Manchester today without encountering any problems or showing any levels of ash concentration.”

A spokesman for Manchester Airport said the latest disruption to flights was not expected to reach the level which previously left thousands of passengers stranded abroad.

He said: “There is absolutely no official suggestion or prediction that the prolonged, continent-wide airspace restrictions experienced in April are about to occur again.”

Meanwhile, Network Rail said it was boosting services to and from Scotland, and to Irish Sea ports, with engineering works postponed where necessary.

Molten glass
Dr Dougal Jerram, a volcanologist from Durham University, warned the last big eruption of Eyjafjallajokull – in the 1820s – went on for about two years, and its current eruption could last “several months”.

But he said the continued eruptions would not necessarily cause more problems to air travel, as a number of factors – explosive eruptions, a concentrated plume and certain weather patterns – needed to be in place at the same time to create “the perfect storm”.

Aviation expert David Learmount told the BBC the ash from the volcano could cause disruption for years.

He said: “This could go on for 20 years or more. We just don't know how long this volcano is going to erupt for.

“Technologically there's nothing we can do about this. We cannot build engines and aircraft which can fly safely through volcanic ash, it's just out of the question.

“The only thing that we can do is get better at predicting precisely where every part of the volcanic ash cloud is.”

In April, airspace across Europe was shut down for five days over concerns ash could turn to molten glass in high temperatures, crippling plane engines.

Scientists and engineers have since revised the safe-to-fly threshold, but clouds of volcanic ash have continued to drift over Europe, causing airport closures, flight delays and cancellations.

In the past week, several airports in southern Europe have been forced to close and flights have been re-routed.

Meanwhile, Italy has fined Irish airline Ryanair 3m euros (£2.5m) for failing to help some passengers after cancelling their flights during the crisis.

Italy's civil aviation authority said it knew of 178 cases of passengers who did not receive mandatory assistance, such as food – required under EU regulations – between 17 and 22 April. Ryanair called the allegation “complete rubbish”.