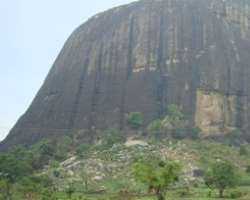 Entering the vicinity, it is clear that locals are still getting over the recent storm which they found themselves in. Some of them are still weary of strangers whom they easily recognise. They are initially reluctant to speak or render assistance and information.

The storm in question came in form of a story that first came up during the Monday 10.30pm-1.00am program, Lean On Me anchored by presenter Tony Amole. A listener called in to narrate the ordeal of his cousin whom he said was kidnapped and taken somewhere behind Zuma Rock. While in custody of the kidnappers, the victim was said to have witnessed ritual killings in which children, as well as adults, were victims with owners of exotic cars and politicians as beneficiaries. On hearing this, other listeners phoned in to say they had heard of such activities going on at the location and would like the situation to be addressed.

It was based on this that Mr. Amole repeatedly called the attention of the Police Force to look into the issue. We visited the supposed ritual killing site. Located and under the jurisdiction of the Sarki of Chachi, Alhaji Musa Abubakar, Zuma Rock is not a haven for ritual killers or any form criminal activities, he said. “About three weeks ago word reached us that there were ritual killings going on behind Zuma Rock. It came to us as a surprise because we have never heard of or had any such incidence in all the years we have inhabited this place. The next we heard of it was when we heard sirens in the area from vehicles which brought policemen to come and do a thorough search of the entire area. Not one person came to me to inquire about the credibility of the news.”

Abubakar said: “A couple of days later, more policemen, about 200, came to raid the area. So we advised the villagers not to go to their farms for fear of innocent people being arrested. Fortunately the only arrest made was of a mad man, as the story was narrated to us. There is no part of our traditional rites that involve killing. We don't need human sacrifices for any of the rites we perform.”

He continued: “The unfortunate thing in all of this is that we have had secret arrests of innocent people even when they are on the farms. Although no bad news has resulted from these arrests we would like them to stop. None of us have complained of his child or relative being kidnapped or missing and nobody has to come to us to make such a complaint or found anybody in this vicinity who is a victim of ritual killing.”

An online report by Radio Nigeria on 04-05-2010, states that, “The Police FPRO also talked about the ritual scare in Zuma Rock, Niger State, he said there was no truth to the rumor that the Zuma Rock area was used for rituals. According to him a raid was carried out on Saturday by the FCT Police Command and nothing incriminating was found.

As result of media publications and complaints to the police over suspected ritual killings around the Zuma rock vicinity in Niger State, the Inspector-General of Police Ogbonna Onovo directed the Commissioners of Police in Niger State and the Federal Capital Territory to explain at a senior police officers conference recently in Abuja the facts of the situation. The FCT CP John Haruna said he had conducted several searches at the suspected area but did not find any ritual activity. “The man that intimated a radio station with the information on the existence of human killers in the place was found and questioned by the police. The police established that the man had mental problems and information emanating from him can't be relied upon,” Haruna said.

The CP said Zuma Rock is under the jurisdiction of Niger State police but the police in Zuba, FCT, often extend their patrols to the area to reinforce monitoring.

Also the Niger State CP, Michael Zuokumor, said he had personally led police operations in the area but was unable to trace the suspected ritual killers. He said the police at Suleja and Madalla have been patrolling the area.

The Police Public Relations Officer in Niger State, ASP Richard Adamu Ogbuche said a team of ten police mobile force and conventional police were stationed just near the rock to keep vigil on the activities of people around the area. He said the police are yet to discover ritual activities in the Zuma Rock area but a number of undercover detectives have been dispatched to the area. However, two weeks after the testimonies of the two CPs in a police conference in Abuja, Onovo further directed them to carry out a joint operation in search of ritual killers in the area. The FCT Police Public Relations Officer SP Moshood Jimoh said a total of 300 policemen were mobilized to comb the area and were led by the Assistant Commissioner in charge of Operations in the FCT Wilson Inalegwu. The police spent over three hours searching the area, the PPRO said, but did not see any shrine were people are slaughtered for ritual purposes or even signs. “One person was arrested in a nearby abandoned building due to lack of accommodation,” Jimoh said. The suspect was later found to be of unsound mind and had to be released to his brother who presented his medical records to the police as evidence.

A source living in a nearby town insisted that there is a shrine around the rock where people are allegedly slaughtered for ritual purposes. Said shrine has been in existence for a long period of time, the source said. For now, Zuma Rock is playing host to arrests, speculation and a palpable fear of ritualists, real or imagined.