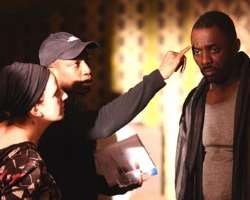 31 year old handsome movie director, Thomas Ikimi, may not be known in Nollywood, but in Hollywood, the Nigerian movie director has made a name for himself as the first Nigerian to direct a Hollywood movie.

His movie, Legacy, featuring Idris Elba (featured above with Thomas) will be released in Nigeria later in the year.

Thomas Ikimi was born in Westminster, London on April 10th 1979. He is of Nigerian descent. He attended primary school in Nigeria, prep and public school in England and university in America. He holds a literature and writing degree from Columbia University, New York.

Thomas' student film, 'Limbo' (2005), after a showing at the Cannes Film Market in 2005, was subsequently invited to the Taormina International Film Festival in Sicily, Italy as an Official Selection. It was one of only 12 films chosen worldwide, and had the added honour of opening the festival. This brought attention to Thomas due to the fact 'Limbo' only cost $9000 to produce mostly on his student credit card, and it was in a fest where the $153 million Batman Begins was premiering in Italy.

Thomas was a second year student when he wrote, directed and produced the film, balancing the 2 1/2 week shoot with his mid term exams. He was nominated for best director and best picture at the Eerie Horror Festival 2004, and he won the Honorable Mention Award at the Flint International Film Festival 2005. Thomas has been working as a screenwriter in London since 2005, writing and developing screenplays for producers.
***