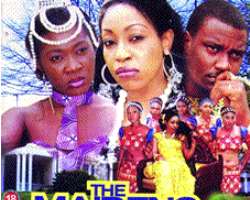 The major theme of The Maidens is triumph of good over evil. Angela (Rita Dominic) is the queen with the heart of gold inherited by Desmond (John Dumelo) a casanova of a king.

Desmond rules like a vagabond. He demotes his late father's secretary Paul (Chiwetalu Agu) replaces him with his bosom friend Kizito (Emeka Amakaeze) whose main job is to cover up for the king's philandering ways. He is the mouthpiece of the king and the one who chases after the palace maidens for the king. The king impregnates a maiden and carries on as if it is his royal duty to sow wild oats here and there.

Of course there is no regard for Angela who has a daughter for the king and her matter became worse when the pregnant maiden Juliet (Ijeoma Okorie) delivers a baby boy. She eventually packs out of the palace after Rhoda (Mercy Johnson) another maiden of hers became another queen in the palace.
Rhoda as queen is dramatic and evil.

Her evils caught up with her and she pays the ultimate price.
The storyline is not too dramatic but the twists in it make it worth the while of viewers. One could tell some ends but some other ends like the place where Rhoda eats the poisonous food deliberately is unpredictable because she could easily own up and escapes death. We find it hard to believe that Rhoda could be that mean, though we understand her need for revenge since her father Paul is being treated like an unwanted entity. But targeting Angela is inexplicable considering she has been extra nice and trusting to her.

Picture
The picture in the movie is sharp and the sound is crisp, even the sound track makes sense.

Scenes
The location at a point becomes boring especially when the scene has to open with the car-like exterior of the palace. The costumes could be better.

Characters
As always, Rita delivers on her good girl role and made us believe she can't hurt a fly. Her delivery matches her actions and proves to all and sundry that experience is not what you buy but earn. A note of warning should be sounded here. This is not like her very best or something extraordinary, but she delivers well.
Mercy Johnson is the perfect backstabber, bitch and heartless maiden that suddenly found herself in position of power. Did she act well? Of course she did and convincingly too.

Adaora Uko's role as Adaobi, the younger sister of Desmond is well thought out. She acts the role of daughter trying to protect the legacy of her father well and convincingly.
Chiwetalu Agu is proof that old hands should still be around to show the way to do things for the coming generation.

Plot
This is a major snag in the movie. The plot is so slow one could almost sleep-off save for the good acting of the characters. The movie is unnecessarily long and slow all in the bid to make the movie a four-part movie; the new evil rocking Nollywood at the moment. By the time we finished watching part one to four we were too tired to write. Not even the presence of women could change the tide.

Dialogue
This could be better. We still need to learn a lot from producers of Three Virgins. Acting is not all there is; what you say when you act is also very important.
Christopher Ozoemena wrote the story and is also the executive producer. Emeka Amakaeze did the screenplay while Iyke Odife directed