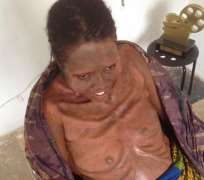 Popular Nollywood special effect designer, Onilogbo Hakeem better known as Hakeem Effect, has become one of Nollywood’s most sort after make-up artist in the industry that one rarely gets the opportunity of meeting him.

He actually followed his passion since trying his luck in acting and he could not get a break through and this new found love has won Africa's best makeup Artist in Africa Movie Academy Award (AMAA) 2016 along with other awards.

It’s the end of the year and the make-up artist has decided to review some of his works which shaked the industry from creating another copy of former South African president late Nelson Mandela to making up for Austine JJ Okocha and others.