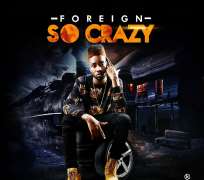 Foreign Just Released another Single titled So crazy, The song was recorded and produced by 2blaz. Check it out guys drop your comment.

David nnaji with stage name of FOREIGN age 22 started music way back In secondary school, he is a song writer, performing artist, free styler and a producer his style of beat is afro hip hop, RnB and Afro fusion he loves making beat

Foreign drop his first single KIND OF LOVE which is still on high demand and now he is back with another smooth track titled SO CRAZY.