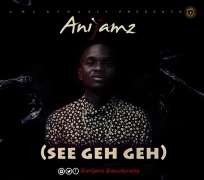 Awu dynasty’s newest signing ‘Anijamz’ is out with his first official single “See Geh Geh” under the Awu dynasty Label. The Multi-talented singer and songwriter was officially unveiled early this year and has not taken his foot off the pedal and has been making waves since then.

The song which was produced by the Nigerian veteran producer “8Notes” and has continued to enjoy wide acceptance and pundits are quickly making out Anijamz as a force to be reckoned with in the industry.

Bravado who’s the C.E.O Awu dynasty promised the visuals to “See Geh Geh” would drop sooner while still on anticipation download below “See Geh Geh” listen and share your thoughts