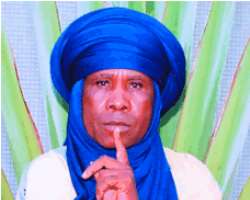 OZO
For the hip hop-crazy generation, his name may not ring a bell. But he's not strange to music lovers of the 1970s. This young but talented man had put Nigeria on the musical world map by the virtue of a song he did way back in 1977. The track, Listen to the Buddha had topped the global music chart, earning the artiste fame and fortune. Keni St. George popularly known as Ozo, the Buddhist subsequently released 14 albums but only one was marketed in Nigeria due to piracy.

Now going by the name Abdullahi Keni, Ozo, who has lived most of his life in England, is back with his last and final album. Blockbuster recently had an encounter with the environmental, human and animal rights activist, who is also a Buddhist monk. He spoke extensively about his music, life in London and his forthcoming book, among others. Enjoy:

Background
I am Abdullahi Keni St. George. I am from Okohia, Ihialla, Anambra State. I have been living in the United Kingdom with my family since 1967. I'm married with four children, Eliza, Gozie Hannah, Zainab Alexandra Nkechi and Zen my boy, all grown up. They are in their 20s and 30s and all married. I am an international environmental, human and animal rights activist. I did the world famous album, Listen to the Buddha in 1977 and I am back to music now. The Letter O for Obama – The Chain is Broken is going to be my last album. It is a 12-tracker from which I have pulled out the legendary song, Listen to the Buddha and backed it up with Mandela (Vulture Park) which is a freedom mix.

From George to Abdullahi
The name Abdullahi came about in 2001. Transformational Environmental Norms (TEN), my NGO, had paid a courtesy visit to the late Sultan of Sokoto, Alhaji Maccido to brief him on the environmental revolution I am trying to bring to the core North. Music is important to me but I want to unleash an environmental revolution. Maccido took a look at me and said what I was coming to do is wonderful for the North but if I was coming from England with a gold earring and dreadlocks, the people will run away. And if I tell them not to cut a tree, they won't obey me, so he suggested I wrap my dreadlocks in a turban. He added that it would be better if I become a Muslim so the people can identify with me. What's more, religion does not mean anything to me. Religion is a dark cloud that obscures the light. So, I stayed back in Abuja and started going to the Central Mosque. Even though, I was baptized as a Christian, they gave me the name, Abdullahi and all the rites were done. Here I am today.

Inspiration
When I meditate, my mind creates some scenes. I can see a band playing a song and I'm in the audience listening. What I do is copy exactly what I heard in the spirit realm. You bring a song, you are telling us the baseline, how the guitar should be and we play it together and a song materializes. So, I write songs through meditation techniques.

Music from heaven
I knew this album was going to be my last. I can go back to London, go back to the old Ozo and start rehearsing new songs. I did that for over 20 years. I am out of it. I wrote some of the songs here and others in England. I wanted to prove that you can produce an album from the surface of the moon. It's a trick we learnt through akashik travel. So, I wanted to produce an album that would be remembered for a long time. And people would listen and say this is like music from heaven. That is all I'm getting even from Disc Jockeys although, heaven doesn't exist of course.

Life in London
Some people think that England is paved with gold. It is not true. England is a very dynamic country, I love England. I feel more of an Englishman than a Nigerian. Surprisingly, you are very safe with the British aristocrats because you are not a threat to them. You are not competing on the same jobs with them. They accept you especially if you are an intellectual and a spiritual subversive like me. I had friends in the upper echelon. Princess Diana of England was a dear friend to me. She used to give my little daughters some of the clothes she wore when she was sixteen. I also admire two intelligent British people, Lord Denin, Master of the Rolls and Tony Wedgewood Benn of the Labour Party, who has been my spiritual twin in England. It was he who helped me get an asylum during the Biafran war.

How I became millionaire
I'll be 64 come August. I don't look it because I do exercises, I don't eat meat or fish and indulge in all these negative sex, animal sex and all that. What I mean is rampant idiotic sex that betrays your animal instinct. I don't indulge in all that. In all seriousness, I believe in telling the truth. My agent in America sent me a cheque of $2 million in 1979 for my first album, Listen to the Buddha. As a non materialist, I reckoned that two million dollars will last me and my children for a lifetime. I am not after money. I totally reject the idea of floating wealth. When I look to the left or to the right in Yanyan, Abuja where I live, I see people that are so poor. I have enough money to buy a Touareg jeep but I won't do it. I was worth two million dollars then. I saved the money, my children will live on the interest until they grow old and die, and the capital will not be touched. Of course, I have been unlucky in Nigeria, any money I bring over here I lost. I lost millions in Savannah bank. I also lost millions of Naira in Societe General Bank.

State of Nigerian music
My first single ever, Listen to the Bhudha was an experience I gained in the monastery. I just wrote lyrics about those experiences and turned them into music. The album was number three on the Billboard chart, Ultimate American chart in 1977 and nobody knew me in America. It was only due to the efficacy, spirituality, innovative propensity of writing a song, composing it and doing the music the way we are known to do it at the time. Any music in the 70s, 80s is supreme. Right now, the music industry has collapsed. There are no more record companies. They have all disappeared because they couldn't sustain the changing times.

On Fela
I love Fela. He is my idol. The Fela family for me is the first family of Nigeria. Fela fought and died for the betterment of the people. He's a very rare breed.

On Buddhism
I'm a Buddhist. In the monastery, they teach you meditation. I don't know if you have ever heard of akashik travel or astral travel. I became an adept at it. I'm a trained Zen Buddhist spiritual master. I applied the training and found out that the universe is God. I am part of that God. You are part of that God. You are in the God. There is no God outside of you. God is light. Light permeates even the rocks, trees, everywhere. On graduation, you are given an option to live in the monastery till you die, mending flower beds, praying and all that. You swear an oath to the universe, your God that whatever you touch, whatever you do must be to the benefit of humanity. That is why I chose environmental, animal and human rights activism.