SAMBO AT A GLANCE 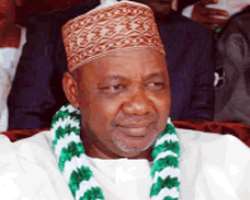 Sambo
Governor Mohammed Namadi Sambo, an architect by training, was born on August 2, 1954 in Zaria, Kaduna State. In 1959, he was enrolled at Baptist Primary School, Kakuri, Kaduna, and later Kobi Primary School in Bauchi and Towns School No. 1 in Zaria. Thereafter, he proceeded to Government Secondary School, now Alhuda-Huda College, in Zaria. He was there from 1967 to 1971.

From there, he proceeded to the School of Basic Studies at the famous Ahmadu Bello University (ABU), Zaria and by 1973 he was admitted to study Architecture and he graduated in 1976 with Bachelor of Science degree with Honours in Architecture.

He obtained his Master's degree from the same university in 1978, from where he went to Oyo State for his NYSC, and served with the Oyo State Ministry of Works and Housing.

As a young graduate then, he had the rare opportunity of being the Architect that saw to the upgrading of the Yankari Games Reserve Holiday Resort, before he was assigned to the then newly created Bauchi State Urban Development Board, where he was directly responsible for Development Control and the Production of Master Plans for Bauchi Town and various other towns which include present day Gombe State, Azare, among others.

From there, he returned to Kaduna, and by February 1986 he was appointed the Commissioner of Agriculture. Two years later, he was moved to Works, Transport and Housing Ministry.

Saturday Sun gathered that during his time as the Works Commissioner, he completed the Kaduna Metropolitan Expanded Water Supply Scheme and initiated the implementation of the World Bank assisted First Multi-State Water Supply Project, which benefited a population of over three million people.

He was said to have also initiated the Kaduna State 99 Towns Electricity Project with over 70 towns connected to the national grid power supply, as against three towns initially connected, before his assumption of duty.

Part of the works he has done since returning to private practice in 1990, before his election in 2007, having attempted to contest during the General Sani Abacha years included National Rural Water Supply Programme – Contract Lot SK1 /B, PTF project for Sokoto State for the Petroleum (Special) Trust Fund; Construction of Eko Tourist Resort and Amusement Park at lbeju-Lekki Tourist Village, Akodo, Lagos for the Lagos State Government; National Water Rehabilitation Project Zone C-Contract No. CBO/1C 01 and zone A – Contract no. ANG 01 ICB, being World Bank-assisted projects for Borno and Niger States respectively, both for the Federal Ministry of Water Resources, Supply of Power and Distribution of transformers for the National Electric Power Authority (now PHCN); Upgrading and Rehabilitation of Kaduna Township Stadium for the Kaduna State Ministry of Sports and Youth Development; Rehabilitation of Zaria Water Supply Scheme, an Upper Niger River Basin project and Biu Water Supply Project Contract 2, both of which are in progress for the Federal Ministry of Water Resources.

Sambo also has a stake in Manyatta Engineering Services Limited. It  was incorporated in 1998 as a procurement outfit, mainly dealing with offshore procurements of electro-mechanical items, laboratory equipment, hospital equipment, special vehicles, aircraft and airport facilities, service and maintenance, etc.

Saturday Sun 's findings further revealed that the firm handled the following projects: Rehabilitation of Agro-Aviation facilities at Old Kaduna Airport for the Federal Ministry of Agric and Rural Development; Supply of H. V. Line Restoration Towers and Movement Trucks to the Power Holding Company of Nigeria (PHCN); Supply of X-Ray equipment and accessories to the National Maritime Authority, Lagos and the Supply of two Bell Helicopters to the Nigeria Police Airwing for0 the Nigeria Police, among others.