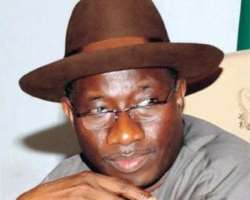 Goodluck Jonathan
President Goodluck Jonathan has declared his interest to run for the 2011 presidential elections, nullifying the rotational presidency agreement of the People's Democratic Party, PDP.

Cairo Ojougboh, the president's special Adviser on National Assembly Matters, made the revelation on Wednesday while briefing journalists in Abuja.

“Mr President is a PDP president and he is a member of PDP, and Mr President will run under the PDP,” Mr Ojougboh said.

He, however, added that despite the zoning policy of the party, President Jonathan will run and they are certain he will win.

“There is no moral justification to ask Jonathan not to run,” he said.