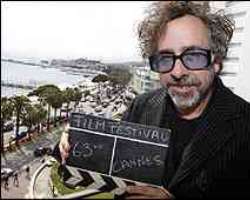 The latest retelling of the legendary outlaw, from director Sir Ridley Scott, is not competing for an award.

Nineteen films will compete for the Palme d'Or, including entries from UK directors Mike Leigh and Ken Loach.

Fiona Pryor
BBC entertainment reporter in Cannes
Cannes 2010: Reporter's Log
New Zealand-born Crowe, who plays the title role in Robin Hood, said: “There isn't a Robin Hood that's been done that gives me a satisfying feeling that I know the motivations of the individual, so that's what we attempted to do.

“There were many, many hours of discussion before we came to the fact that we'd better start at the beginning of the story and see how we do.”

He later added: “Back at the hotel, long, fun day. No street show tonight. This is the part of Cannes that is great, the spectacle, the celebration of film.”

Loach's film Route Irish was a last-minute addition to the festival and tells the story of two Liverpudlian ex-soldiers who go to Iraq to work as private contractors.

The Wind That Shakes the Barley won the director the coveted Palme d'Or in 2006.

But Loach missed out last year when his film Looking for Eric was in competition – the award eventually went to Austrian film The White Ribbon.

Leigh, who won the Palme d'Or in 1996 for Secrets And Lies and was nominated in 2002 for All Or Nothing, will be screening Another Year, starring Jim Broadbent, Lesley Manville and Imelda Staunton.

The ensemble comedy drama tells the story of a married couple, their friends and family over the course of a year.

Asia has a strong showing, with two entries for the main prize from South Korea – Poetry by Lee Chang-dong and Im Sang-soo's The Housemaid – while China, Japan and Thailand are also represented.

France has three films in the race, Chad is represented for the first time with Mahamat-Saleh Haroun's The Screaming Man, and Ukraine also makes a debut in the main category with Sergei Loznitsa's My Joy.

Financial disaster
The winner will be announced on 23 May by the Cannes jury, headed up this year by director Tim Burton.

Oliver Stone's Wall Street sequel will debut at the festival

Other films showing out of competition include Woody Allen's You Will Meet A Tall Dark Stranger, which stars Naomi Watts and Sir Anthony Hopkins.

Around 10,000 members of the film industry, 4,000 press and thousands of film lovers and celebrity watchers are due to attend the festival, regarded as the top Europeanfilm event of the year.

But this year's festival has had to contend with the threat of the Icelandic volcanic ash cloud drifting across Europe, which led to 100 flights being cancelled at nearby Nice airport on Sunday.

And organisers have already faced a last-minute clean-up after a freak storm lashed the resort last week, sending giant waves crashing over cafes and festival installations on the beachfront.