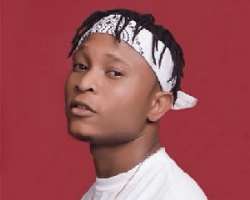 By TOFARATI IGE
YBNL signee, Viktoh, was the one who introduced Lil Kesh to his label boss, Olamide, but the latter has released his music album, while Viktoh is yet to have an album to his name. As a result of this, many feel that there is a bitter rivalry between the both of them, but Viktoh says he is not intimated by Lil Kesh. In his words, “When it comes to music and what you love doing, there shouldn't be any kind of pressure. I'm not under any pressure from anyone in my label, or even outside. I'm taking my time to bring out good stuff for my fans. I don't like to rush, and I always wait for my time.”

Hinting on when his album will likely be released, he said, “My album should be coming out next year. I don't want to say much right now, but keep your fingers crossed because it's going to be a different style; things you've never heard from me before.”

On the inspiration behind his song, 'Skibbii That,' he said, “I was just playing around in the studio, and the idea came. Skibii is like my best friend in the music industry, so the song wasn't a 'diss' at him.”

Viktoh also has glowing words for his label-boss, Olamide. According to him, “Olamide is not just a boss; he's a brother and leader. He's a very wonderful person, and creative. He is also a good example for others to follow.”