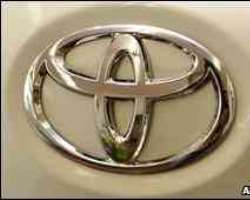 Toyota is forecasting profits will increase in the current financial year

Toyota returned to profit in the fourth quarter despite the Japanese carmaker's recall problems being at their height.

Toyota was hit by a string of recalls, but cut its prices to keep buyers going into showrooms.

For the year to the end of March Toyota made 209bn yen, a sharp reversal from the 437bn yen loss in the year before.

Revenues for the fourth quarter were 5.28 trillion yen, up from 3.54 trillion yen a year earlier when the global recession was at its deepest.

Toyota, the world's largest carmaker, was forced to recall more than 8 million cars because of safety concerns, and faces lawsuits in the US over deaths caused by alleged faulty vehicles.

Despite the safety issues, Toyota also announced that it was forecasting better financial results for the next fiscal year, with profits of about 310bn yen.

'Ray of sunlight'
Global sales for the year was totalled 7.24 million vehicles, down 4% from the previous year. Toyota forecast this would improve to 7.29 million sales for the current fiscal year.

“There's no change in the fact that we are in stormy waters. But now I feel that even in the storm, we can see a ray of sunlight in the distance,” Toyota's president Akio Toyoda told a news conference in Tokyo.

Last month, Honda reported an operating profit of 96bn yen for the January to March period, while in the US Ford reported a larger-than-expected $2.1bn quarterly net profit.