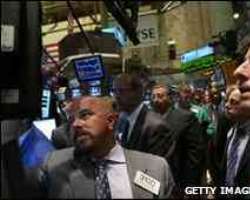 On Wall Street, the Dow Jones index closed down 0.34% following a turbulent day's trading, and a nearly 4% rise on Monday.

A White House spokesman admitted US President Barack Obama was concerned over the situation in Europe.

European measures to halt the debt crisis were announced at the weekend.

The package of loans and guarantees worth 750bn euros ($975bn; £650bn) initially buoyed markets, with shares in London up 5% and the Paris stock market up 9%.

But both markets fell today, by 1% and 0.7% respectively. Shares in Frankfurt were up slightly.

President Obama was said to be “actively engaged” in preventing the impact of the crisis from spreading to the US financial sector.

The concern is that a loss of confidence in some European economies with high debt levels could spread to other economies, including the US.

Spain has been deemed at risk by global investors, alongside Greece and Portugal.

In the UK, share prices fell in line with European markets.

Uncertainty during the day over who will form the next government did not appear to hit investor confidence.

Sterling rises
Although the FTSE fell slightly, the successful auction of UK government bonds on Tuesday morning suggested a vote of confidence in the UK economy among global investors.

Demand for the bonds remained strong, with the issue being two-and-half times oversubscribed.

Sterling has been sensitive with all the back and forth

As a coalition government between the Conservatives and the Liberal Democrats looked more likely, the pound rose against the dollar and the euro.

The pound rose above $1.50 following the resignation of Gordon Brown, having reached a low of around $1.4725 earlier in the day.

Todd Elmer, a currency strategist at Citigroup, said the pound could rise further providing the UK's public finances are tackled.

“Sterling has been sensitive with all the back and forth,” he said.

“Now, with more clarity in regards to the future government, there's scope for positive surprises.

“If the government implements fiscal adjustments quickly, for example, that would be very supportive to sterling.”

More widely, investors remain concerned over how successful the package of measures agreed by EU members on Sunday will be in tackling Europe's debt problems.

Many have pointed out that the loans and guarantees promised too little to tackle the underlying problem of high levels of borrowing and debt.