Davido Fights Falz And Adekunle Gold For Simi With N1billion 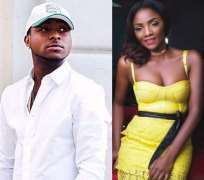 At the moment, it'll be hard to write the story of Nigeria's fastest rising female act, Simi without giving honourable mentions to the men in her life who are also pop stars; Falz and Adekunle Gold, reports NET

But another player is entering the equation, and he has a lot of money to throw around.

He was guest on a radio station in Lagos recently where he was asked if he'll consider signing a female act.

His response was, 'I don't think I can handle a female artiste, but if I'm going to sign anybody, I'll put a billion on SIMI.'

Simi, who is currently signed to the Steve Babaeko-led X3M Music, is the only Nigerian artiste featured on Davido's latest EP Son Of Mercy.