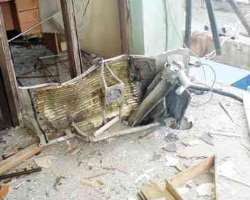 The administrative department of the Niger Delta Development Commission, after an explosion in Warri… on Tuesday

An explosion on Monday night rocked the Delta State office of the Niger Delta Development Commission, in Warri.

The deafening blast from the building located along Efejuku Street, off Deco Road, caused panic among residents of the oil-rich city. A former Military Governor of the defunct Mid-Western Region and ex-Chief of Army Staff, Gen. David Ejoor (retd.) lives close to the building.

The blast occurred less than two months after a bomb explosion aborted a conference to fashion out a lasting solution to the protracted Niger Delta crisis in Warri. Some governors and other high profile personalities escaped death in the March 15 incident.

The Movement for the Emancipation of the Niger Delta, had claimed responsibility for the March 15 explosion.

Our correspondent who visited the scene of the explosion on Monday, reported that no life was lost.

He, however, observed that some offices in the two-storey building were seriously damaged by the blast which also left a yawning hole on the building's staircase.

As at 5pm on Monday, no official reason had been given as the cause of the incident. But it was learnt that some youths in the state had threatened to attack the NDDC office for the failure of the commission to empower them through employment.

Efejuku Street looked deserted in the early hours of Tuesday as residents who fled their homes when the explosion happened were yet to return.

Only a few number of workers were sighted in the premises which had a heavy presence of armed policemen and private security guards.

Police anti-bomb experts deployed in the scene combed the NDDC apartment and nearby buildings on Tuesday in search of unexpended explosive devices.

The Delta State Representative on the board of the commission, Mr. Emmanuel Ogidi, visited the office in the early hours of Tuesday apparently to obtain a first-hand-information on the incident and instill confidence in the staff.

Ogidi, who assured the staff of their safety, also visited Ejoor to explain the outcome of an interim investigation by the police on the blast.

He, however, ruled out bomb explosion, claiming that the compressor of an air-conditioner, which exploded in one of the offices caused the destruction.

Ogidi said, ''It wasn't a bomb explosion. The police have sent experts who looked at it. It was caused by a faulty air-conditioner. We have received threats here and there. Some youths have been coming to threaten the staff and we took up the matter up with the Area Commander.

'We can not say that youths are responsible for what happened but when you issue threats like that, you will readily come to mind when something like this happens.

'We asked them (youths) to form cooperatives .We have gone into a partnership with First Bank of Nigeria Plc. The bank promised to monitor the loans to the youths . We don't have the capacity to give loans to these cooperatives and start monitoring them. We want to train the youths and give them employment.'

When contacted on the telephone, the Police Area Commander in Warri, Mr. Alkali Shaba, confirmed that the interim report by the police on the explosion ruled out bomb explosion.

Shaba said, 'It was not bomb blast as being speculated. The explosion was as a result of electricity spark from one of the appliances. To be specific, it was the split air-conditioner that exploded.

'The police do not have anything to hide and there is no cause for alarm. Residents should go about there normal businesses without fear.'