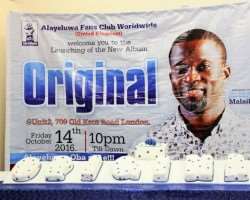 In attendance where celebrities, fans and members of the United Kingdom chapter of Alayeluwa Fans Club Worldwide. Speaking after the launch of the album, MALAIKA said: “This is another happy moment in my life, another achievement in a journey I never thought I would go this far. I give God the glory and want to thank members of the Alayeluwa Fans Club in United Kingdom who put this together. By the grace of God, the album hits the market in November and my fans and music buffs can look forward to enjoying great songs in the album”. This would be Malaika's 23rd album release since he began his career. His last effort, “Superstar” was released in September 2014.