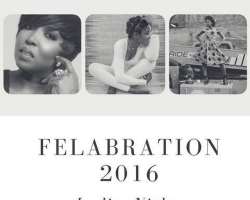 Once again it’s the celebration of Africa’s prime legend; Fela Anikulapo Kuti known as “Felabration”. As the country honors its own in its tradition of afro-cultural, classic events, Imanse; the fast rising songstress extends her musical credibility as she is billed to grace this year’s musical homage to Africa’s great.

It is not by chance that Imanse is getting an immense amount of attention, her fast rising musical career is propelled by pure talent and musical ingenuity.

She is a prolific songwriter that has written several songs for a Broadway play, “No Limit” in Maryland, USA which was a huge success.

Imanse has potential. Her song “Gbona” featuring Falz “The Bad Guy” was just a tip of the iceberg. She has more from where that one came from including her new release “Original somebody” which she would be performing live at Felabration 2016.

Fela lives on and continues to inspire and shape the Nigerian music industry. Nothing would stop Nigerians from celebrating this great legend.