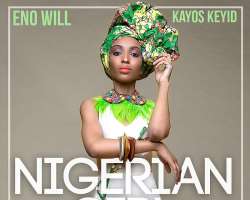 Kayos the former Texas Southern University student, is an Actor who briefly appears in Nollywood movie (“Randy in Houston” by Director/ Producer Prince C. Danian) and also in the Houston street Film “Muscle the Movie” by Director Squrilla Montana of Grade A Media).

The first proper singles are the more up tempo “Wahala Dey” and “Nigerian Girl” which is a remake of the late great Michael Jackson’s “Liberian Girl” with a Naija twist.

Kayos recorded these songs in Houston alongside Houston based Naija R&B singer, Eno Will and their Single release party will be held this coming weekend in Houston, Texas.