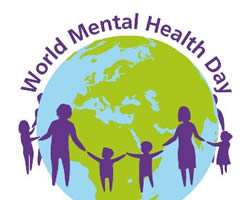 World Mental Health Day holds today October 10.
It is a day dedicated to the education, awareness and advocacy of mental health in the world.

It was first celebrated in 1992 at the initiative of the World Federation for Mental Health, a global mental health organisation with members and contacts in more than 150 countries.

Here are 10 facts to know concerning mental health according to the World Health Organisation (WHO): 1. Around 20% of the world’s children and adolescents have mental disorders or problems About half of mental disorders begin before the age of 14. Neuropsychiatric disorders are among the leading causes of worldwide disability in young people. Yet, regions of the world with the highest percentage of population under the age of 19 have the poorest level of mental health resources. Most low- and middle-income countries have only one child psychiatrist for every 1 to 4 million people. 2. Mental and substance use disorders are the leading cause of disability worldwide About 23% of all years lost because of disability is caused by mental and substance use disorders. 3. About 800 000 people commit suicide every year Over 800 000 people die due to suicide every year and suicide is the second leading cause of death in 15-29-year-olds. There are indications that for each adult who died of suicide there may have been more than 20 others attempting suicide. 75% of suicides occur in low- and middle-income countries. Mental disorders and harmful use of alcohol contribute to many suicides around the world. Early identification and effective management are key to ensuring that people receive the care they need. 4. War and disasters have a large impact on mental health and psychosocial well-being

Rates of mental disorder tend to double after emergencies. 5. Mental disorders are important risk factors for other diseases, as well as unintentional and intentional injury Mental disorders increase the risk of getting ill from other diseases such as HIV, cardiovascular disease, diabetes, and vice-versa. 6. Stigma and discrimination against patients and families prevent people from seeking mental health care Misunderstanding and stigma surrounding mental ill health are widespread. Despite the existence of effective treatments for mental disorders, there is a belief that they are untreatable or that people with mental disorders are difficult, not intelligent, or incapable of making decisions. This stigma can lead to abuse, rejection and isolation and exclude people from health care or support. Within the health system, people are too often treated in institutions which resemble human warehouses rather than places of healing. 7. Human rights violations of people with mental and psycho-social disability are routinely reported in most countries These include physical restraint, seclusion and denial of basic needs and privacy. Few countries have a legal framework that adequately protects the rights of people with mental disorders. 8. Globally, there is huge inequity in the distribution of skilled human resources for mental health