Restore my love...What a joke! 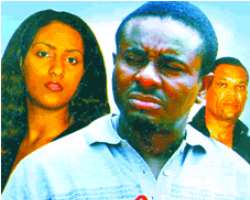 We've seen many poorly made movies in Nollywood, this one is worse. The fact that Emeka Ike is the actor does not change anything. As a matter of fact it makes the disappointment worse because one would have thought that his presence would lift one's spirit and provide quality entertainment. He didn't make a difference.

Plot
Restore my Love is the story of Janet (Juliet Ibrahim), a banker whose husband Achike (Emeka Ike) maliciously and falsely accused of infidelity and she was eventually thrown out. Achike's suspicion is fuelled by his friend's belief that all female bankers are prostitutes. Janet's friend also conspired against her by feeding Achike with false reports of Janet's alleged escapades Achike goes to take a village girl while Sharon lost her job at the bank because she wouldn't give in to pressure from her boss and customers to spread her legs to save her career. Achike goes for a village girl that is supposed to give him peace, but his life took a turn for the worse and your guess is as good as mine. He goes cap- in- hand begging Juliet who is already carrying his baby unknown to him.

Flaws in the movie
It is better classified as an experimental school project. It is a pity that someone like…. (Mr China) produced the movie.
There are many bad sides to this movie one could easily get confused trying to pick which side to start from. The storyline is whacky, archaic, unconvincing and boring. From the word go, you couldn't tell what bend the story would take and it is so obvious you know next to nothing about the story, script conference, screenplay and dialogue.
The producer must have assembled the cast before he thought of what role each would play. How can you explain Juliet Ibrahim's acting? After seeing her in this movie, one would now know the real reason she never broke into the big league in Nollywood despite her fine face. Acting is not about how pretty you are it is about talent. If this movie should be the premise on which we should assess Juliet, she cannot act to save her life. We also wonder what made her startled in most of her roles. Please to keep viewers sane keep Juliet Ibrahim out of our face.
As for Emeka Ike, disappointment is the word. We are not saying Emeka should be blamed for all the unpardonable errors in this movie. Even as an actor, the factional president of AGN did not deliver. If his eyes are not dancing, he will be busy playing up a cartoon face or rest his chin on his arms. We believe a primary school theatre group would have done better. We thought Emeka who is always vocal about professionalism should have known better. As a professional, you don't do everything. We have seen the father of three in better movies where he delivered convincingly. This movie isn't just it. His acting compounded the whole thing.
Please don't try and analyze the sound quality of this movie. You will have to keep working the remote to hear what the cast is saying. Juliet's dialogue was difficult to pick because she was talking like a robot on heat. The sound track could better be described as a joke and in several scenes the sound track overlapped the dialogue and the song could bore even a corpse. The picture quality was zero and the cinematography shows how unschooled the hands behind the movie are. One wonders on what grounds Nollywooders complained that AMAA is not giving them choice awards if this is the kind of movie they churn out.