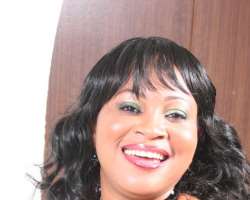 From Owo ale to Omotara johnson

'I thank God'
For star actress, Bukky Wright celebration seems to be a year long thing. Not too long ago she hosted friends and family to a private but posh birthday party at her Magodo residence.

Just when friends are relishing their experience, the mother of two is set to roll out the drums again and this time she is celebrating 15th years on stage as an actress.

Those who think her private birthday party was posh will probably gasp in awe if they know the extent to which the mother of two plans to celebrate. Reports made available to SBN indicate that she will be celebrating in four countries namely: Nigeria, Ghana, Republic of Benin and South Africa.

She will be hosting fans and friends and unveiling new projects. As a way of giving back to society she plans to rehabilitate some schools and donate furniture and first aid boxes to them.

The date of the event which is being put together by Kemi Otegbaje-led Heartlink will be announced shortly. 'speaking on her journey so far, the actress said she is grateful 'I am grateful to God for being faithful, he has been good and has been with me through thick and thin. I thank God'.

Meanwhile SBN can also tell you authoritatively that the actress is planning to unveil something big for later this year. The event we learnt, will put her far above her colleagues in the industry. She started her acting career with Visa to Hell and produced her first movie, Owo Ale not too long after.