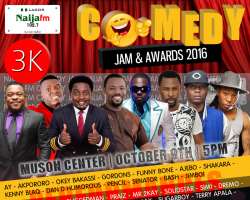 Lagos| Nigeria, September 30, 2016: All routes lead to Muson center on the 9thof October, as top shots in the Nigerian entertainment scene including AY, Praiz, Timaya, Okey Bakassi, Lola Rae, Solid star, Funnybone, Ruggedman, Simi and many others have been announced as performers at the annual comedy concert, Naija FM Comedy Jam.

The concert, which is organized by indigenous radio station, Naija 102.7 FM, will recognize and celebrate comedy acts and personalities as well as the most outstanding comedy shows for the period under review.

“The Naija FM comedy jam has become a signature platform through which we appreciate our radio listeners and this edition promises to be the best yet. It is a celebration for our listeners, for the performers and for us as the Nigerian comedy scene continues to grow and break records beyond our most optimistic projections when starting out.”

Tickets are available at Naija FM offices, ariiyatickets.com , All Slot outlets, All Prince Ebeano supermarkets and US polo stores. For information on Naija FM comedy Jam 2016 visit www.naija102.com , like us on Facebook at www.facebook.com/1027naijafm or follow us on Twitter @Naija102 and Instagram @naija1027fm.