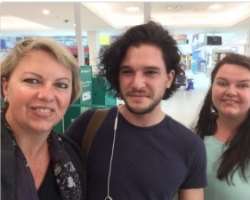 The shooting of the highly anticipated season 7 of Games of thrones is well underway as cast members of the hit TV show have been spotted in Belfast, Ireland — the place they do a large bulk of the filming each year.

Although, it may be eight long months before we can watch Game of Thrones again, here are the stars that have been spotted so far by fans…