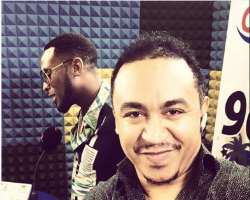 Nigerian controversial OAP, Freeze has made some shocking claims about new generational pastors.

Freeze during his Sunday show on radio talked about tithing and also made some revealing tweets about it.

The ace presenter who has been involved in heated controversy with some comedians on social media said; “Most pastors today are not serving God, they are so unlike Christ, and many are just business men in Pentecostal suits! Imagine tithe paying members of a church cannot afford to send their children to schools that those churches built; it's a shame! Jesus and his disciples did not have the flamboyant lifestyles our pastor today live.”

In response to a tweet, he tweeted: “Who fed you this garbage? Im sure its one of those yahoo boys in pentecostal suits u call pastor? Jesus did not say this, don’t be duped.”

He however shared a deep insight into how the disciples lived and died.

“Jesus' death on the cross, as described in the New Testament, has become one of the most famous events. But what happened to the 12 disciples who were his closest followers? Not as much information has survived about their fates, but here is what's available from various sources, including the New Testament itself, apocryphal texts, early Christian historians, legends and lore.”

Freeze continued the argument on twitter where he tagged Nigerian pastors as yahoo boys.