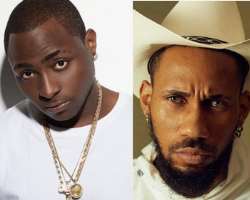 Adeleke David; popularly known as Davido alongside wordsmith; Phyno have been revealed to be the headliners at the highly anticipated upcoming concert; '3 Thrones' set to hold on the 23rd of October 2016  at EKO Hotel Convention Centre, Lagos.

The announcement which came as posts on Social media has since made the rounds with several fans of both artistes expressing their excitement.

The concert is revealed to have three headliners which are referred to as “kings” and they are prepared to occupy three thrones at the concert, hence the name '3 Thrones Concert'. DJ Jimmy Jatt and DJ Neptune have been unveiled as 'The Guardians' of the thrones. However, the third headliner hasn't been revealed so far as fans continue to hanker for the third revelation.

Speaking on the choice of these artistes, one of the organizers, Adetoro Suleiman had this to say; “After careful consideration, Phyno and Davido were meticulously selected by the team owing to their undeniable eminence and the impact they've made in the Nigerian music industry and Africa at large.

These are individuals who are hardworking and have put Nigeria on a pedestal through their art over the years. So far; two of them have been revealed – the last king will be revealed in due time. This is a concert that will be talked about for years!”

'3 Thrones Concert' promises to be an unforgettable experience as it is said to be the biggest concert Nigeria will ever experience.